Are you kidding me?

I started this blog mainly as a informational source, and hoped to keep it unpolitical, and then this morning happened!
As most of you know, I do the Pest Control for the Region #14 School system. Well, this morning I got a call from the head of the cafeteria at Mitchell School here in Woodbury. She told me that the Public Health inspector had just been there and he had told her that they had cockroaches. Now, I have never seen any indication of roaches in the cafeteria, so I had my doubts. I told her I would be right over. Upon my arrival, I went right to the cafeteria, knowing that if they had them they were either brought in by a student from home(accidentally), or from a supplier of food for the school. She took me to the area and showed me a "sticky trap" insect monitor that I keep there and she showed me the "roach" that was pointed out to her by the Health inspector. It was a "ground beetle", an insect that sometimes comes into buildings in late summer/early fall. It is weather related and are known in the pest control as "occasional invaders". They don't get into food, don't breed inside, and usually die shortly after getting in the building. There is really nothing that can be done about them, and the problem is temporary.
My issue with this is that here we have a Public Health inspector, who works for the government, inspects school cafeterias, restaurants, nursing homes, etc. and doesn't know what a cockroach looks like. I find that outrageous. These are the people who are supposed to protect the Public health, and are leading the fight against the H1N1 flu virus outbreak. Entomology 101, anyone! Be afraid, be very afraid.
Posted by Jon Quint at 11:13 AM No comments: 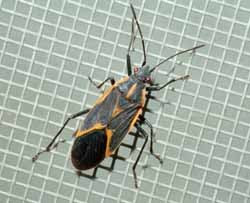 At this time of the year you might be getting ladybugs in and/or around your house. If you are not, then maybe you have these. They are Box elder bugs. They do the same thing at this time of year that ladybugs do - look for a warm dry place to spend the winter. They are about an inch long. They spend the summer in maple, ash, and box elder trees feeding off the juices and leaves.Unless there is a huge population of them, and usually there isn't, they don't do damage to the trees. Get out the vacuum cleaner!
Posted by Jon Quint at 4:00 PM No comments:

Are you seeing them? 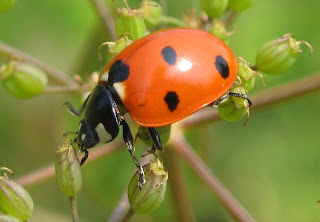 They are ladybugs or lady beetles. They are orange with black spots, about 1/8 to 1/4" long, and right now, by the thousands, they are looking for a warm protected spot to spend the winter after a summer of living in the trees. If you have a light colored house (they seem to prefer those), you may be overrun with them. They are crawling all over the sunny side of your house. They are getting inside through cracks around doors, windows, your garage door, and where wires and pipes enter your house. Sealing those areas with caulk or something similar will slow them down, but will probably not completely stop them. The good news is that the problem is temporary and shouldn't last much longer. Once they get inside they will overwinter in your walls and/or attic. They will not get into food, infest, or damage your house. In the Spring, the cycle will reverse itself (you may get some more inside then because they forget how they got in and some will wind up inside again) and they will leave to spend another summer out in the trees eating aphids, which are very destructive insects. Lady bugs a very beneficial, and the ones that get inside are best picked up with a vacuum cleaner. Don't squash them as they will leave a reddish orange stain and they stink when crushed. This is one insect problem that there is really no "Professional" solution to. Anything we would do, and we charge for it, you can do for free.
Posted by Jon Quint at 12:15 PM 5 comments:

Snakes - Oh, the horror! I guess it all goes back to Adam & Eve and the infamous serpent. Snakes are not slimy, in fact they feel quite dry to the touch. I can see some people shivering out there already. We are probably one the few pest control companies out there that advertise that we "do" snakes. What do we "do" with snakes? Well, let's give you a little background first. I get calls for snakes, and nine times out of ten they are "copperheads". No, not really, but that's what the customer thinks. After all they don't have a rattle on the end of their tail, so they can't be rattlesnakes and after all, if it's a snake, it must be poisonous, right? Wrong! I've hunted, fished, and trapped my entire life and I have never seen either a Copperhead or Timber rattlesnake, the only poisonous snakes in Connecticut and which are very uncommon and rarely seen. Most snakes seen around homes in residential areas are Garter snakes (not Garden or Gardener snakes), milk snakes, ring neck snakes, northern water snakes (not water moccasins) or smooth green snakes. All are non-poisonous and totally harmless. Although they may appear aggressive, especially if they think they are cornered, they will not attack or chase you. Like any animal they just want to left alone to go about their business. They are very beneficial and good to have around. They feed on insects and rodents. How do we handle snake calls? If the snake was seen outside, not much can or has to be done. Occasionally, a snake will be found in a basement. These are usually ring neck snakes (a very large one might be a foot long), or milk snakes. The others are not usually found inside. There are 14 species of snakes native to Connecticut. I have listed the more common ones. Others can be found on our website. So, basically, in most cases not much is done with snakes, because of the "nature of the beast", so to speak. When we do capture a snake it is released my backyard. I like having them around.
Posted by Jon Quint at 6:29 PM No comments:

Are you getting some yellow & black "bees" in your house now that the weather is cooling off? These are yellow jackets and if you are getting them in the house, it means that somewhere in the structure of your home you have a nest of them. They don't have much longer, because after the first couple of hard freezes (low to mid 20's) they will be dead, but until then, as morning dawns and they become active, they will go toward the warm side of their nest. This means that if it is cold outside and they have a way to get into your warm house, guess which way they will go. They don't want to be in your house and will likely fly right to a window in an attempt to get out. They will probably be lethargic and not particularly aggressive, but if one should be on a chair when you sit down.....Ouch! It is sometimes very difficult to find out how they get inside, so the nest should probably be killed from outside. During a fairly warm part of the day, go outside and walk around the house looking for "coming & going" activity at their entrance. It is probably best to call a professional because if you spray the entrance, the nest will probably not be killed, and since the spray acts as a repellent, it will just drive more into your house.
Posted by Jon Quint at 10:24 AM No comments:

One Man Operation No More

I started this business in 1995, after 30+ years in Corporate America doing Production Control work. I got laid off from two different jobs in a period of about two years and decided I wasn't going to do that anymore, so North Forty Pest Control was born. I have operated it by myself until last April when my stepson Matt Bryant joined the business part time. He has his NWCO (Nuisance Wildlife Control Operators) license, a pesticide Operator's license and is working on his Supervisory license. The plan is for him to work with me and gradually take over the business at some point in the future. So there will be two of us showing up on most jobs for the immediate future.
Posted by Jon Quint at 8:39 AM No comments:

It's That Time of the Year 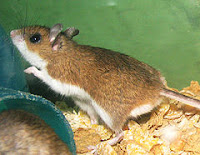 It's mid-October, the weather is getting colder, and all those mice living outside are sensing it, too. They want a warm place to spend the winter and what could be more inviting than your home. It's nice and warm, especially under the insulation in your attic, or behind the furnace in the basement. "Yeh, I know, but my house is sealed up tighter than a drum, no mice can get into my house". Do you have a garage attached to your house? Well, last Friday night when you came home from the football game after dark and you pressed the remote to open the garage door, did you notice that pregnant mouse that was right outside the door and ducked inside when the door opened? You now have mice in your house. They can't be kept out. If your house is really sealed mouse tight and they want to get in they will just chew their own hole. Deer mice, which normally live outside are the most common mice that move into homes for the winter. Their droppings have been linked to Hanta virus, a serious and frequently fatal lung infection. Although there have not been any cases in Connecticut, do you want to take that chance? They also are major carriers of Salmonella bacteria. One of the more common ideas is that the mice move in, in the Fall, and then go back outside in the Spring, but once they get inside they find out there are no hawks, owls, red foxes, or snakes in the house and realize that your home is a pretty safe place to live and decide to stay. Permanently! Now is the time of year to do some kind of treatment to clean out the mice already in your home and take care of the occasional mouse that will be moving in over the winter.
Posted by Jon Quint at 6:34 AM No comments: