Yellow jackets and White faced Hornets are usually amazing engineers. Those large gray paper nests they build will stand up to just about anything. They start the nests in mid-May and they just get larger and more populous as the summer goes along. You would think that being made of paper, a good heavy thunderstorm would wipe them out, but the rain just runs right off them. Occasionally, you'll see one built in a location that makes you wonder if they have lost faith in their Engineering Dept. Maybe it's a new college graduate in charge, and they figure they need some extra protection, just in case, so they built their home here! 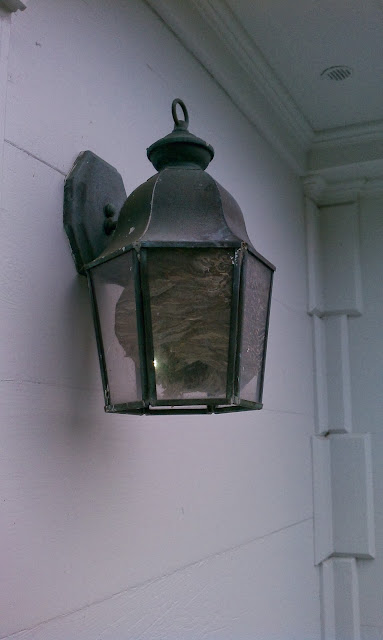 Soon (3 or 4 weeks from now), bats will be leaving their summer roosts (your attics, louvers, shutters, or soffits) for their winter hibernation. Relax, not everyone has bats! Bat exclusion can then be done without worrying about having to get the bats out first (98% of the time that is true). On a rare occasion, you may get one macho male bat who thinks he can overwinter in his summer roost. Those that attempt that normally die over the winter. Once bats leave, we can go over the house and close up any possible entry points, so when the bats return in the spring, they can't get back in. It is much less expensive doing it this way, than having to gets the bats out first.
Yesterday, we did a job in Roxbury, where the customer had bat droppings accumulating on the patio under the louvers (the slatted vents for the attic) of his house. We put up the ladder, climbed up, and checked. Didn't know if the bats were living in the louvers, or the louver screening had failed and they were in the attic. No bats in that one, screening was intact, so we sprayed the live wasp nest we found, removed all the old wasp nests, and covered the louver with hardware cloth. Now to the other end of the house, put up the ladder, and along with the wasp nests, were two Big Brown bats hanging on the screen under the louver slats. Screening on that one was intact, too. It was a little chilly, so the bats were a little lethargic. When I shooed them out, they didn't fly, they just opened their wings, and kind of parachuted to the ground. We picked them up with gloved hands, put them on a stone wall in the sun, and a few minutes later they had warmed up to the point where they flew off, but in the meantime, I got these photos.
Went back up the ladder, cleaned out the wasp nests, and installed hardware cloth.  Another successful job! 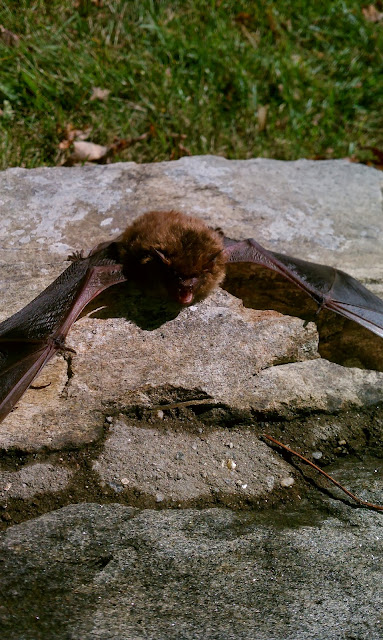 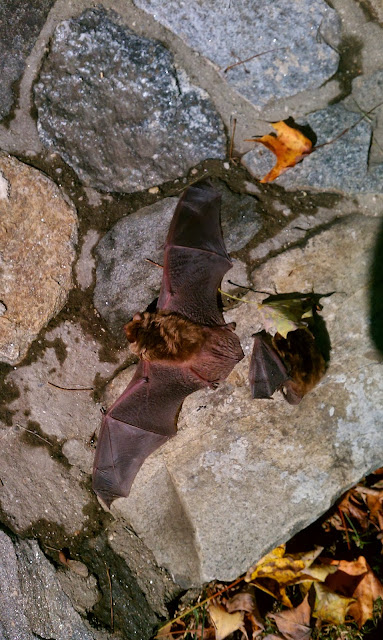