They Look Like They Could Carry Off a Small Child

It's late July and you walk out into your backyard. Suddenly, you see what looks like a huge "bee" (pictured above) flying over the surface of your lawn. What is "that thing" you ask yourself? As you are asking yourself that question, it disappears down a hole in the ground that looks like the picture on the right. You have just become acquainted with a Cicada killer, a member of the wasp family. While they are huge and terrifying and capable of stinging, they are essentially harmless. You would have to really work at it to get one to sting you. They prowl the woods looking for cicadas, which are huge insects about 2" long (pictured on right). When they find one, they sting it. The sting does not kill it, but paralyzes it. The cicada killer then picks it up and carries it back to it's burrow. It drags it down into it's burrow, which can be 10-12" deep, and lays eggs on it. The eggs hatch into larva which begin to feed on the paralyzed cicada, literally eating it alive. Cicada killers prefer sandy soil with sparse grass which makes digging easy, and usually prefer to burrow into banks and not level areas. There may be more than one burrow in a given area, but there is no connection among the various burrows. They are solitary nesters, and multiple burrows only occur because the habitat is good for them. They can be treated, but are not harmful, and should just be left alone to go about their business.

The Squirrel from Hell

I promised in a recent post that I would tell this story, so here goes. 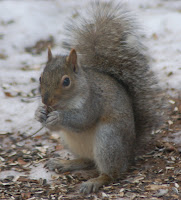 About 10-12 years ago, around 1:00PM, I got called to a Law Office in Waterbury for a squirrel running around the office. When I arrived, the squirrel was missing in action. The office was divided by those fabric covered cubical walls most of us are familiar with. I found the squirrel hiding in a corner behind the cubical walls which had been set up against the wall, leaving about a 4" gap between the cubicle wall and the building wall. I set up a trap at the end of the wall, and put several cardboard boxes on top of it to prevent the squirrel from jumping over the trap. I took a pole I have and went to the corner and from over the top of the wall I started poking the squirrel along towards the trap. I got him about half way along the wall and all of a sudden he took off like a shot and ran right into the trap and set it off, but he turned in the trap and headed out so fast that when the trap door came down it caught him by the tail, but he was outside the trap. I had my heavy duty gloves on and managed to get a hold of him, so I could get him back into the trap. I held him with one hand, while I tried to open the trap with my other hand. It is very hard to open the trap with one hand and during my struggles the squirrel got away from me. Instantly, he vanished. I searched the office for another half hour and couldn't find him. I told the woman from the law office that I was working with that I would have to set and bait the trap, and leave it overnight. However, after his experience with the trap I had my doubts that he would go anywhere near it, but I set it, baited it, and headed home. About 5:00 PM, I got a call from the woman at the office - we had caught the squirrel in the trap! I was totally surprised! I went back to Waterbury, got paid for the job, and came home with the squirrel. When I got home I took him out in back of the house and let him go by my woodpile which is near the back door. By now my wife had gotten home from work and was inside preparing supper. I went in the house, washed up, and sat down to eat. Now, you need to know that we eat on TV trays in the living room while we watch the news. As I was eating, I suddenly heard a squirrel chattering right between my chair and the end table next to it. I slowly peeked over the edge of the chair and there was the squirrel sitting right next to my chair. Now the critter is inside my house. I motioned to my wife and slowly got out of my chair and went out to my truck to get my hoop net. This is a net on the end of a pole, which has a cable running through the handle, so the top of the net can be pulled closed. I set up the net next to the chair and asked my wife to take a broom and push the squirrel towards the net. Sure enough he ran right into the net. I quickly pulled the cable and closed the net. As I turned around to head out the door, I noticed the squirrel was hanging on the "outside" of the net. He dropped off and headed down the hall towards the bedrooms. I started looking for him again, and found him hiding behind the waste basket in the bathroom. I shut the bathroom door and told my wife we should finish dinner, clean up, and then deal with the squirrel. After this was done, I went back into the bathroom with the net, caught the squirrel, and this time I flipped the net over figuring the first time he may have squeezed out through the top which doesn't close totally tight. As I got out into the hallway, I noticed he was hanging off the outside of the net again. He dropped off, and ran back in the bathroom behind the waste basket again. It was now obvious that the net pole wasn't going to work, so I went out to the truck and got my grasper, a tool that allows me to grasp and pick up an animal from a distance. I grasped the squirrel and headed outside. I made sure the door was shut tight and went out to the woodpile. I let the squirrel go and he ran up a nearby tree trunk to a height of about my eye level. I turned around and headed back into the house. The next thing I know the squirrel is hanging on to my right leg between my ankle and knee. OK, this is enough!! I grabbed the squirrel with the grasper, went into the garage, and put him back in the trap. He spent the night in the trap in the garage and the next morning we took a ride to Litchfield (about 15 miles away) and I let him go at White Memorial Foundation, which is a 4000 acre wildlife sanctuary. I never saw him again, but that night I woke up in the middle of the night, and I just had to sit up and check the bottom of the bed to make sure he wasn't sitting at the foot of the bed looking at me.
Posted by Jon Quint at 1:29 PM No comments: